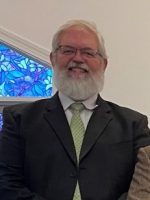 Jesse Royall is an Elder here at Grace Harvest Baptist Church and has been since 2007. Jesse is the Executive Vice President for Sydnor Hydro, Inc. and has been employed there for the past 32 years. Jesse and his wife Deborah have four adult children, Rebecca and her husband Jason Bush, Jay, Brandon and his wife Candice and Amy and her Husband Nathan Duncan. Jesse and Deborah also have 7 grandchildren. Jesse has been married to Deborah for 38 years. He and Deborah met on a blind date setup by his brother’s wife. Jesse says that from the moment he saw her he fell madly in love, they have been actively involved in ministry serving God together for the last 35 years. Jesse Royall has a Bachelor’s of Science Degree in Civil Engineering from VA TECH and a Master of Science Degree from the University of Maryland in Environmental Engineering. He is also a licensed Professional Engineer in multiple states. Genesis and Exodus are two of Jesse’s favorite books of the God’s Word because we see how he had a plan for our salvation from the beginning; we also see the consequences of disobedience and the rich blessings of obedience. In the Old Testament, he would have to share with you Deuteronomy 6:4-9. This passage reminds him not only of our love for God but also our responsibility to teach our children and live our life sold out for Him. In the New Testament, he would have to share two verses that go together, 1 Cor 15:33, and James 4:5. Jesse was raised in Chesterfield County when it was still rural with a dairy farm across the street. His dad owned a well drilling and brick masonry company as he grew up. This gave him an early exposure to equipment and working side by side with his dad and brother which he still cherishes to this day. As a result, his hobbies and his work have become intertwined as he loves to operate equipment and build things. He enjoys college football and is a Hokie Faithful Fan as time allows.