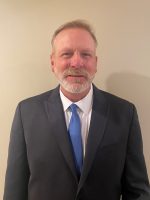 Pastor Bryan Patrick and his wife, Aimee, joined Grace Harvest in 2019 after moving to the area from the Shenandoah Valley and Winchester, Virginia, region. He was born in Denver, Colorado and raised in Las Vegas, Nevada. He was ordained in February 2022 as GHBC’s Pastor of Family and Youth.   Previously, he retired from active duty military service with the U.S. Army in 2006 going on to earn his bachelor’s degree in Biblical Studies in 2011.  His longest position held since retiring was as an instructor for the security branch of the U.S. Department of State, Diplomatic Security which he left in February of 2022 after more than 11 years. Pastor Bryan and his wife have always actively served the Church in varied capacities to include six years he served as a small church bi-vocational pastor from 2012-2018. The Scripture verse that has been a constant comfort and reminder of God’s sovereignty in all circumstances to Pastor Bryan is Romans 8:28, “And we know that for those who love God all things work together for good, for those who are called according to His purpose (LSB).” Pastor Bryan and Aimee together have four children and two grandchildren among others they love dearly that God has placed in their path over the years and whom they consider as their own.